I am so. over. winter. No really, I am. This from someone who embraces each season, relishing the changes in the landscape, giddy over puffy, white clouds and bright blue skies as well as lover of rain clouds, fall leaves and the first snow . . . all within reason. But move it along, Mother Nature, let’s move it along already.

END_OF_DOCUMENT_TOKEN_TO_BE_REPLACED

The Professor and I are participating in Verizon’s ‘Savy Gourmet’ program and have been having fun testing Motorola’s new XYBoard (ZIE-board). We met a group of Midwest friends in Chicago last month to get a few lessons on what this new tablet can do. We’ll be talking about the XYBoard tablet in future posts but now I want to share my take on a particular salad we enjoyed at a top-secret dinner, held in a top-secret place.

END_OF_DOCUMENT_TOKEN_TO_BE_REPLACED 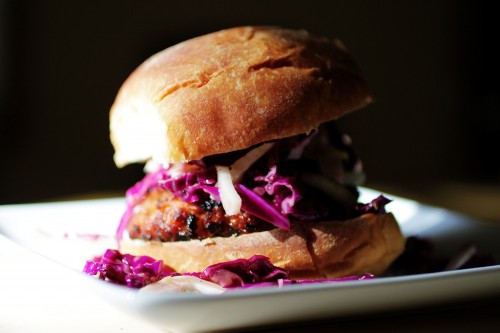 Musical pairing – Let’s Go To The Hop by Danny & The Juniors.

In my childhood town of Walla Walla, there is a little burger joint on Birch street called, ‘The Ice-burg’ that has been a fixture in that community for almost 60 years.  My mom and dad dined on those burgers and shakes as teenagers (it was ‘the’ hangout) and I’ve been known to indulge in a chocolate-banana shake . . . ok, maybe two.  The place still looks like it did when they opened in 1953 – reminiscent of an old-fashioned Drive-In from movies like ‘American Graffiti’ and ‘Grease’.  Voted ‘Best in the West of the Mississippi’ by USA Today, the place is legendary – quite a feat considering Walla Walla is home to several award-winning wines, vineyards and fancy-schmancy restaurants on the West coast.   Nostalgic sigh . . .